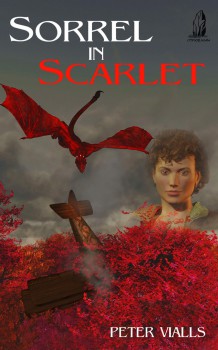 Sorrel in Scarlet is an old-fashioned sword and sorcery tale (with just a little bit of early industrial technology), which put me in mind of Edgar Rice Burroughs’s John Carter series, not least because of the abundance of red and the scantiness of clothing. But there’s also the obvious parallel of the heroes finding themselves lost in a strange land and coming to the rescue of the people there. I do think this book comes across favorably in the comparison, since the heroine, Sorrel, is less superhuman than Captain Carter, and thus her adventures are more believable.

In the years before the story begins, the humans of Sendaal rose up against their dragon overlords… and lost. Sorrel is one of the few remaining pilots in Sendaal, and part of a group of rebels looking to achieve some measure of revenge. To that end, she steals a jasq–the living symbiote that provides sorcery to both humans and dragons–from Wrack, the very dragon who had cut her own jasq out and stolen her sorcery. Her daring escape goes less smoothly, and Sorrel crash lands her triplane in the Chasm. This deep rift in the ground is perpetually shrouded in mist, and those on the surface believe that it either leads to a sea or the center of the Earth. Instead, there’s a vast scarlet forest at the bottom of the rift. With her co-pilot dead and suffering from fatal injuries herself, Sorrel implants the jasq in herself in a desperate attempt to save her life. Implanting a second jasq is usually fatal, but in this case works… mostly. It heals her injuries, but causes agony whenever she tries to enter the magerealm to use sorcery.

One would think that being trapped in the Chasm with a dragon, a destroyed plane, and a non-functional jasq would be enough of a challenge, but Sorrel soon discovers that there are worse things in the Chasm. The red forest is crawling with deadly predators, orc-like graalur, and worst of all, the serpentine lloruk, creatures of legend thought to be extinct after their war with the elves. Fortunately, there are more or less friendly humans there too, and Sorrel soon finds herself trying to help them against the graalur. The lloruk are on the warpath, conquering and enslaving city after town, and preparing to use something worse on the surviving humans–a modified jasq called a larisq that can control the mind. Sorrel is desperate to help those who took her in; but it’s a task she can’t perform on her own, without any technology or magic, and she finds herself relying on her worst enemy, Wrack.

Sorrel in Scarlet is told from Sorrel’s viewpoint. She has a sarcastic voice, with a self-effacing humor that’s a little bit noir. It serves her well as she goes from one dangerous situation to another without much rest in between, and the staccato rhythms of the prose fit well with the driving narrative and the plentiful action. One thing that didn’t work as well were the plethora of fantastical words. It’s a standard trope for fantasy to use a lot of made-up words and you certainly expect to find some. However, in this case, they felt over-used, and, on an aesthetic level, had an unpleasant sound to them. The worst offenders were the profanities–squuming, volging, lafquass. Now, many of the words are supposed to come from the lloruk language, which may explain the excess of s’s and q’s, as in jasq and larisq; but the swear words don’t have that excuse, as Sorrel specifically notes that the lloruk language lacks the profanities she normally uses. Now, I can appreciate an author wanting to use different curse words than English, both to avoid using them and to give his culture character. But the best way to do that is to take common words that we don’t use as profanities and give us a reason to understand why the word has that power in another culture. Just translating our swear words into another language doesn’t work as well, especially when it’s pretty obvious what they’re substituting for. But while I found the language a bit distracting, the story had sufficient momentum to help me overcome those speed bumps.

While the main conflict is between Sorrel and the lloruk and their graalur servants, at the core of the story is the relationship between Sorrel and Wrack. Wrack is a dragon; but in Sendaal, dragons can transform to human and back at will–it’s not at all clear that the dragon shape is any more Wrack’s natural shape than the human one. That makes the interaction between Sorrel and Wrack more complicated than most human-dragon interactions. They knew each other before the war, and while they were more associates than friends, it was clear that Wrack had a more than platonic interest in Sorrel. During the war, they were enemies and fought many aerial duels, dragon versus airplane. And then Wrack won. He captured Sorrel alive, stole her jasq, and then made her his slave and humiliated her, until she finally managed to escape. It’s understandable that Sorrel still holds a grudge and her revenge by stealing Wrack’s jasq makes perfect sense. Of course, stealing Wrack’s jasq also stole his ability to transform between dragon and human form, at least when he’s not in close proximity to Sorrel. So it’s also understandable that they are more than a little reluctant to trust each other as they join forces against a common enemy. After all, Wrack may be Sorrel’s best shot to return to the surface, but he has every reason to make her a slave again if they do.

Where this interesting and complex relationship stumbles is in how easily they overcome those differences. It’s not painless; but in the end, all it seems to take is a better understanding of Wrack’s true motives for Sorrel to overcome her hatred of him. That left me dissatisfied. He did start the book by killing her co-pilot, after all, though that may not have been entirely intentional. I think the story would have benefited by making this transition a little less abrupt, its resolution more ambiguous and Sorrel’s feelings more ambivalent. Or at least Wrack could have been more convincingly reformed.

The story comes to its end a little too quickly, with a big battle against the lloruk, but not a whole lot of resolution, which of course sets up a promised sequel, which Mr. Vialls assures me is on its way. While I think Sorrel and Wrack may have been too quick to team up, I have to admit that they make a very effective team. I’m looking forward to seeing them work together to find and eliminate the source of the larisqs.

Sorrel in Scarlet is available at Amazon (e-book and print (US, UK)), Lulu, and Drive-Thru Fiction.