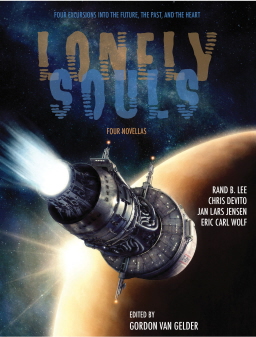 I love novellas, and I think they’re the perfect length for SF and fantasy. Long enough to really explore characters and setting, short enough to demand ruthless pacing — and to read in one sitting. I bought as many as I could fit for Black Gate (a few more than I could fit, truthfully), and writers were always grateful. Time and again I was told that the novella was a hard sell these days… only a handful of markets would take them.

One editor who does regularly feature novellas is Gordon van Gelder, for The Magazine of Fantasy & Science Fiction. Even though each issue is a massive 256 pages, however, he’s still limited in how many he can fit. So I was pleased to see the recent appearance of Lonely Souls, an anthology of four novellas just published by Gordon’s Spilogale press.

Many science fiction writers view the novella as the optimal length-short enough to be read in one sitting, but long enough to build a world. And what better world can we build and examine, than the landscape of our lonely souls? Gordon Van Gelder has brought together a set of four novellas that dig deeper into the recesses of our beings.

In “Goliath of Gath,” Jan Lars Jensen offers us a look at figure of legend not usually considered: Goliath. One of the last of his people, the giants, in a changing social and political landscape. A pacifist manipulated into death with the promise of peace. A man whose story is rarely examined in favor of David, the plucky hero of the Bible.

Then Eric Carl Wolf brings us to a grassy, cowboy-country, beef-herding planet as barren as the Old West in “Demands of Ghosts,” where we meet a former assassin seeking anonymity and redemption.

In “One Day at the Zoo” by Rand B. Lee a young girl with special powers is “saved” from being experimented on by the closest person to her, her mother, who seeks instead to destroy her.

In a strange, violent, debauched future, an assassin confronts a new technology that enables immortality, destroying the value of death, and he begins a quest for oblivion, so goes “Final Kill” by Chris DeVito.

Spilogale also publishes digital versions of Fourth Planet from the Sun (covered here) and F&SF. We covered the July/August issue of F&SF here.

Lonely Souls is currently available in electronic format. It is 267 pages, priced at $5.99. There is currently no print edition. Learn more here. Check it out and support great short fiction at a great price!