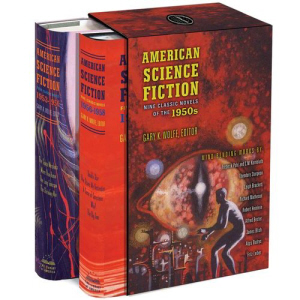 We’re lucky enough to receive a lot of review books here at the Black Gate rooftop headquarters. Having the latest fantasy and SF novels arrive at our door before they’re available in stores never gets old, let me tell you.

Of course, cataloging them all and dropping them in the mail for our trusted circle of reviewers gets a little routine after a while. But it’s worth it for those special titles that come in once or twice a month, the ones you drop everything to gawk at. I’ve been a blogger for 16 years, and a publisher and editor for over a decade, but at heart I’m still a fanboy. And every month there’s at least one new book that proves it.

And then there are those special items that come in once or twice a year that you know that you’re not going to bother cataloging or telling the reviewers about. Because you’re never going to part with it. Such a treasure arrived a few weeks ago.

I’m talking about American Science Fiction: Nine Classic Novels of the 1950s, a two-volume set published by The Library of America and edited by Gary K. Wolfe. If I were stranded on a desert island tomorrow, this is the one item I would bring. For one thing, it’s big enough to practically be a life raft.

But just don’t take my word for it. Here’s what Western Civilization’s finest Arbiter of Taste, the distinguished Mr. James Enge, had to say on Wednesday:

Wow. Fritz Leiber, Leigh Brackett, Pohl & Kornbluth, Blish, Heinlein, Matheson, Bester, Sturgeon, and Burdys — all swept into the Library of America, and in appropriately lurid covers, too. Overdue, but somehow I never thought I’d see it.

Indeed. American Science Fiction: Nine Classic Novels of the 1950s is a gorgeous set of volumes collecting the most essential SF of perhaps the most important decade in the history of the genre. 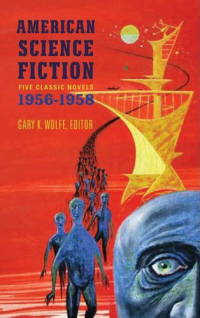 Here’s the details, straight from the publisher:

Following its acclaimed three-volume edition of the novels of science fiction master Philip K. Dick, The Library of America now presents a two-volume anthology of nine groundbreaking works from the golden age of the modern science fiction novel. Long unnoticed or dismissed by the literary establishment, these “outsider” novels have gradually been recognized as American classics. Here are genre-defining works by such masters as Robert Heinlein, Richard Matheson, James Blish, and Alfred Bester. The themes range from time travel (Fritz Leiber’s The Big Time) to post-apocalyptic survival (Leigh Brackett’s The Long Tomorrow), from the prospect of a future dominated by multinational advertising agencies (Pohl and Kornbluth’s The Space Merchants) to the very nature of human identity in a technological age (Theodore Sturgeon’s More Than Human and Algis Budrys’s Who?). The range of styles is equally diverse, by turns satiric, adventurous, incisive, and hauntingly lyrical. Grappling in fresh ways with a world in rapid transformation, these visionary novels opened new imaginative territory in American writing.

Volume Two is 950 pages, and contains Robert Heinlein’s Double Star, Alfred Bester’s The Stars My Destination, James Blish’s A Case of Conscience, Who? by Algis Budrys, and Fritz Leiber’s The Big Time. 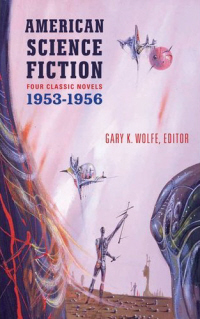 In case you missed it, that’s a combined total of 1,750 pages of classic SF.

The gorgeous cover art, on both the individual volumes and the slip case, is by Richard Powers, who did the covers for many of the original paperbacks.

Editor Gary K. Wolfe is Professor of Humanities in Roosevelt University’s Evelyn T. Stone College of Professional Studies and the editor of Up the Bright River. I know him chiefly for his thoughtful and entertaining reviews in Locus magazine.

American Science Fiction: Nine Classic Novels of the 1950s is a set of two hardcover volumes, shipped in a slip case. It will be published by The Library of America on September 27, with a retail price of $75. Cover art by Richard Powers.

Each volume is also sold separately for $35. You can get learn more, and get a lot of additional online content, at the Library of America website.