I first met Ty Franck online, then in person at LosCon, and we’ve been friends ever since. He blames me for a lot of things that have happened in his life, but the truth is he warps the forces of space, time, and luck to create his own mini-universe with its own rules, as you’ll see from the interview below. My story of Ty that I think gives the most accurate impression of the kind of guy he is, is one he’s probably tired of hearing me tell. But it bears retelling.

Years ago he was held up at gunpoint at his workplace, after hours. Gangsters broke in, cut the phone lines, and tied up both him and another woman who was working late. Ty managed to keep talking to get the gangsters off guard, and then when they left the room, his coworker untied him and he used the company’s internet (which wasn’t connected to the phone lines) to message another office, who in turn called 911.

Yes, this is a true story, but I haven’t gotten to the most unbelievable part yet. After the police arrived and sat Ty down for questioning. The dialogue went something like this:

“What can you tell us about your attackers?”

“But you know Glocks?”

“Because they were holding it about here-” Ty mimes having a gun held to his forehead “-and you could read it on the side. It said, Glock 40.”

Ty would be my first choice of friend to have around during the zombie apocalypse. I call dibs. 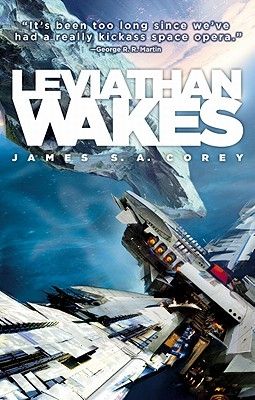 Emily Mah: First off, let’s talk about your background, whatever parts of it you’d like to share. Before you were James SA Corey, what did you do for a living?

Ty Franck: A lot of stuff. But just prior to coming to New Mexico I was working as a financial software consultant with a company I helped start. Before that I ran a computer manufacturing company, and before that I worked in logistics with a musical instrument retailer. Before that, I broke rocks at a rock quarry, built sailboards and wind surfing masts, sold newspaper advertising, sold radio advertising, and briefly did high rise building renovations.

What’s the worst job you’ve ever had?

Whichever one I currently have, usually. I hate jobs. Even the word makes me angry. I must admit, though, my current gig is pretty good. Probably the worst objectively was breaking rocks at a rock quarry. It’s the exact same job you see prisoners doing in old movies.

You’ve put literally years of work into the world of Leviathan Wakes. When did you first start building the world and what other incarnations has it had?

It started out as an idea for an RPG, but it really only took concrete form when I sat down and laid it out for a video game pitch. A friend asked me to help her develop content for an MMORPG pitch, and I took this game set in our solar system that I’d been tinkering with and finished laying it out. That really kicked off the big push to do solid world building for it. [Interviewer’s note: Said friend was me.]

Do you still have time to write RPGs while you work as a novelist?

Not really. I have a semi-full time job, and I write half of a 200,000 word novel every year. I haven’t done any game design in a couple years.

You’ve had an unusual path to a writing career. Can you share how it was you became the author of a novel?

I feel hesitant to answer this, because everyone will call BS on me. But here goes: I wrote a short story as a goof while working at the computer manufacturing company. A mutual friend of mine and Orson Scott Card’s showed the story to him. He sent me a very complimentary email and invited me to attend his writer’s bootcamp. Shortly thereafter, I decided to leave the company I was with, and wound up with a fair bit of money from severance, and no real plans. I drove across the country and attended the bootcamp. I didn’t do much after that but write a few more stories that I never submitted. However, when Scott Card started his online magazine, he asked if he could buy my first story for the second issue. I of course said yes. When I moved to New Mexico, this professional sale qualified me to join Critical Mass, the writers group where I first met Daniel. It was through that group that I wound up becoming friends with Daniel, and that eventually led to him asking me to run an RPG he and his wife could play in. This led to him asking me if I’d be willing to collaborate on a novel set in the universe of my game. I said yes. We wrote it, Orbit bought it, and then I was suddenly a novelist. All without ever really deciding to be one. It just sort of happened.

How has co-writng a novel compare to writing an RPG?

It’s completely different. RPGs are largely extemporaneous. You need to have the setting and major events well in mind, but the majority of things that happen in the game come from player actions, and as the game runner you react to those actions. Novels require the world building, but they also require a much more concrete plot, and none of the characters design themselves. It’s a lot harder to write a novel than to run a game.

You’ve got a day job a lot of people would envy. Care to share what it is, how you got it, and how you’ve liked it?

I work for George R.R. Martin as his personal assistant. George needed help, our mutual friend Melinda Snodgrass told him to hire me (I believe her exact words were, “he ran a 150 million a year company, he can handle your paperwork), and I’ve been working for him for about five years now.

Is it true that Orson Scott Card’s son threatened to beat you up for flirting with his girlfriend at a con in LA? And that you ate a moth once?

If he did, I’m sure it was jokingly. We’re friends, and he’s about half my size. But his girlfriend was cute. [Interviewer’s note: I included this question as a joke. Said girlfriend was me, and this was actually how Ty and I first met at LosCon. He was wearing a nametag that said “Slash”, so you can see why we hit it off.]

Yes, one time, I swallowed a moth. This came as a great surprise to both myself and the moth.

How has cowriting compared with your solo work?

Working with Daniel is like getting the best writing workshop of all time and getting paid to go.

One adage of writing is to write what scares you. Of all the scenes you’ve written, which one scares you the most?

I once wrote a short scene in which a very bad man cuts off a person’s finger and then tells him he’s going to keep cutting things off until he gets what he wants. I am creeped out by Cronenberg style body horror.

Which scene would you wish you could live, personally?

I want to live on the Rocinante. I’d happily be the cook.

Which character is the most like you, and why? Or which one do you wish you could be more like?

Amos is my Id.

Do you still write short stories? Feel free to plug any upcoming releases.

I’m actually under contract to write five novellas set in The Expanse universe. The first Expanse story is called The Butcher of Anderson Station and is available as an e-book through the usual online retailers.

What are some upcoming novel releases you’d like to tell Black Gate readers about?

The second Expanse book is called Caliban’s War, and comes out in early summer of 2012.

What novel was on the Kindle screen when Jeff Bezos did his international announcement of the Kindle Fire?

Jeff had Leviathan Wakes open to chapter one during one of the demonstration videos for the Kindle Fire.

Did you have any idea that would happen?

We had no idea, but it was awesome.

Have you noticed any change in attention to your books or hits to your websites since?

The only real attention we got from it is people saying, “Hey! Did you see the Kindle Fire thing with your book on it?”

Mine is idiosyncratic. I helped write a story for a friend who was busily almost dying. [Interviewer’s note: Vic Milan, who is, we’re happy to say, very much alive and has new books coming out. But I digress.] I feel like there’s some conflict of interest in me trying to get Wild Card’s gigs, since my boss is the editor, so I won’t submit proposals to the franchise. But I’ve promised that if they need a last minute collaborator to help someone who’s in the hospital, I’ll be the designated hitter.

Who are your favorite authors whom you feel not enough people are reading?

I don’t know how many people are reading him, but I really like Joe Hill a lot. Nice, engaging horror novels.

One time I swallowed a m- oh wait. Right.

Well, you know I’ve been thorough as an interviewer when!

wonderful interview. The leviathan wakes cover caught my eye awhile back and it looked interesting. maybe i’ll give it ago after Christmas.

I confess I read the rough draft, not the final yet, but I’d recommend it based on that.

[…] Here I am interviewed by the center of the writing universe (seriously, this woman knows everyone) Emily Mah.  I mostly natter on about nonsense, but there’s a lovely picture of Jen Taylor, famous video game voice and TV/Movie actress, hugging on me.  So it’s worth checking out just for that. […]

Is that kind of thing written on the side of the gun?

Okay, Ty says he thinks he read it but can’t remember because it was so many years ago. (I would not have been able to say the color of the gun with any kind of accuracy, had this happened to me.)