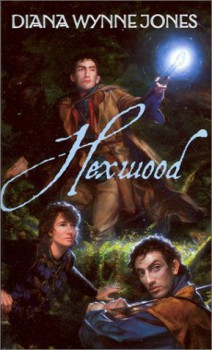 The first Diana Wynne Jones novel I ever bought was Howl’s Moving Castle, in 1986. Everyone at the science fiction bookstore where I shopped — the House of Speculative Fiction, in Ottawa, Canada — was talking about it, and Pat Caven the owner pressed it into my hands.  It was by no means the last.

Jones studied English at St Anne’s College in Oxford, where she famously attended lectures by J. R. R. Tolkien and C. S. Lewis before she graduated in 1956. She began her writing career with plays, and had three produced in London between 1967 and 1970.

In 1970 she switched to prose with her first novel, Changeover, a comedy marketed for adults. She began writing for young adults with her second book, Wilkins’ Tooth (1973, published in the US as Witch’s Business), and never looked back.

Although Jones is widely admired as a YA fantasy writer, she had a surprising range. Perhaps my favorite of her books is The Tough Guide To Fantasyland (1996), a hysterical tourist guide which skewers dozens of fantasy clichés as it catalogues the common places, weird items, people, governments, and situations readers are likely to encounter as they journey through a typical fantasy novel. 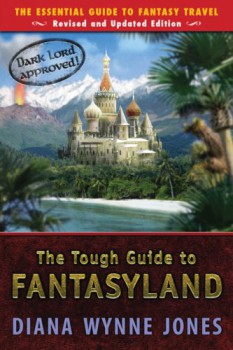 Her later novel Dark Lord of Derkholm (1999), set in a Fantasyland which steadfastly adheres to the conventions she described,  is seen by some as a conceptual sequel to The Tough Guide.

She received the World Fantasy Award for Life Achievement in 2007, perhaps the highest honor our field has to offer.

Her novels have enjoyed extended life in other media: Archer’s Goon became a BBC television serial in 1992, and Howl’s Moving Castle was famously adapted as an animated feature by Hayao Miyazaki in 2004.

Jones continued to work until late in life, publishing her last novel, Enchanted Glass, last year. She was diagnosed with lung cancer in 2009, and died on March 26, 2011.

I came to her stuff in my mid twenties through Howl’s Moving Castle. I’d seen the movie and thought it so beautifully weird I had to read the book. The book made more sense but was still beautifully weird — in a way I liked even better. First book I ever finished, and as soon as I was finished with the last page, opened it up to the first and read it all over again.

I’ve started collecting all her Chrestomanci novels. Maybe because I’d really like to marry Christopher Chant when I grow up. If only for the opportunity to steal all of his FANTASTIC dressing gowns. Boy, could her characters dress well.

I was just, by coincidence, reading The Tough Guide on Saturday. I was preparing to outline a new fantasy story and was looking for inspiration regarding what to avoid.

She was one of the great YA fantasists.

I would LOVE a review of her Chrestomanci novels for Black Gate. What kind of bribe can I offer you?

> She was one of the great YA fantasists.

Well said. I can only hope all the recent press after her death spurs more interest in her books.

One of my favorite writers of all time – GONE! Her fabulous literature will live on.

SHE WILL BE MISSED!

[…] Wynne Jones was born August 13, 1964 and died on March 26, 2011. Various writers who knew her have made some excellent biographical posts; I especially recommend […]