“Do you think a ghost will follow you home?”

This is coming from my six-year-old niece, who has finally began to grasp that her Auntie is up to some intriguing shenanigans. Her two older siblings went through the same phase; when they were around this age I spent a year in the UK, and had convinced them I was a guest professor at Hogwarts School of Witchcraft and Wizardry.

Having never quite grown up myself I had no end of fun perpetuating this fantasy in my two young nephews who, at the time, were obsessed with Harry Potter. I emailed back pictures of Kings Cross Station, where the Hogwarts Express leaves from platform “nine and three-quarters.”

Contrary to popular belief, the Brits do have a sense of humor and proved the point by putting up a sign between platforms nine and ten and displaying a luggage cart pushed half way into the brick wall below.

My nephews apparently held this picture up to my sister as proof positive that I was at Hogwarts, but she was having none of it.

I followed this with pictures of the phone booth which was the secret entrance to the Ministry of Magic, a narrow cobblestone street of antique book sellers that is a dead ringer for Diagon Alley, and a darkened pub entrance that was most certainly The Leaky Cauldron.

This got me a stern talking to from my extended family about blurring the line between reality and fantasy to two impressionable kids, which of course just forced this entire storyline underground, making it the most tantalizing secret between the kids and me.

As older siblings are wont to do, the boys eventually expanded these stories ten fold and told them to their younger sister, making my Aunt-ness far out done by my magical-ness, which suits me perfectly.

However, it raises the bar rather high on my future performances.

I maintain that in every family, in every generation there is one kid who is left of center and though that is clearly me in this age group, it is turning out to be my little niece in the next. From her earliest years she refused to be frightened by the stories her brothers told her, and instead drank them in like a Jack Rabbit Slims’ milkshake.

What’s even better is that she kicked these antics up a notch, daring the boys to turn on Ghost Adventures when the parents weren’t around — which resulted in the boys wanting to sleep with the lights on, and my little niece making “boo-ing” noises from the next bedroom.

So it is she who is posing the question about the ghosts following me home from my latest sojourn into the supernatural. She’s not worried this is going to happen, but instead worried that it won’t, and also wondering if one doesn’t tag along back to Chicago with me, could I arrange it if she put a ghost on her Christmas list?

As the family member who has taught at Hogwarts School of Witchcraft and Wizardry, and who clearly has a direct line the land of magic, I’m apparently far more reliable than Santa.

Outdoing the Hogwarts story is definitely going to be a challenge.

But as is my annual Halloween tradition, Mr. Goth Chick and I are off to far flung shores in search of something cold, clammy and horrifying to chill your bones in an upcoming post.

I can’t say more than that for now, but I promise you a thrilling read upon my return. 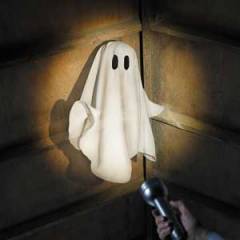 In my absence, true to my threat, I have off-ed the latest batch of useless Goth Chick interns and replaced them with a far more reliable and entertaining protégé.

Next Thursday you will be thrilled and tantalized by my boss’s daughter and Goth Girl in Training, “Tabitha” whom you likely remember brought you the very engaging review of The House of Dead Maids sometime back. I certainly wouldn’t trust your amusement to just anyone, you realize.

See you in two weeks and until then, send your Halloween stories and exploits (along with pictures I hope) to Sue@blackgate.com. Happy Hauntings!