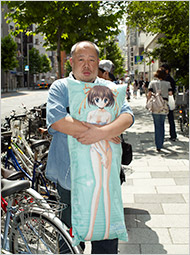 Okay, I’ll admit that in a past indiscretion I went to an adult store (this was in the days before the Internet, when it was the only place you could get such things) and bought an anatomically correct blow up doll.  But, it wasn’t for me. Honestly. It was a joke gift for a bachelor party. Nonetheless, I want to take this opportunity to apologize to my congregation, my constituents and my family for behavior that was actually perfectly innocent, though I realize it could be construed by some as some kind of perverted behavior  by those who haven’t as yet been caught in their own perverted behavior.

At least I didn’t actually use the thing (nor, to my knowledge, did the prospective groom). But, true, I am guilty in the trafficking of plastic pleasure dolls.

According to this article from The New York Times he’s just lonely. And, he kind of realizes it’s a little nutso (though maybe a little less nutso than the aforementioned plastic blow up doll, though if you read the whole article you’ll find out that there are sexier versions than this guy’s blankie). Nor is this guy an anomaly. There’s a whole sub-culture based on Japanese anime characters of guys practicing pillow love.

It’s always weird when something out of a William Gibson novel turns out not to be made up.

The popularity of pillow substitutes for human affection is attributed to the inordinate number of males versus available females ratio in Japan. Well, maybe. But I’m not sure this is the most logical explanation. Look, I’m a live and let live kind of guy. What you do in your bedroom (or even in public) is your business as long as you aren’t hurting or exploiting anyone. And I can almost relate to the guy’s difficulties in having a 3D relationship in what most of us consider reality. It is a lot of work (I know, I’ve been married 25 years and I’m sure my wife would have the same thing to say). It’s easier to relate to a pillow, or a virtual computerized lover that is physically perfect in all respects, except for not being real.

Still, even as some of the pillow guys intellectualize this in a way that does make sense, there remains something overwhelmingly sad about it.

It’s not just a guy thing, either. I once saw an ad for “body pillows” which were clearly being marketed to women who wanted the sensation of sleeping alongside someone, although they weren’t as overtly sexualized as some of the stuff directed at men. (I’d document this with a link, but somehow I’m reluctant to sort through the results of a web-search along these lines. Since I’m all out of “Forget-about-it” pills today.)