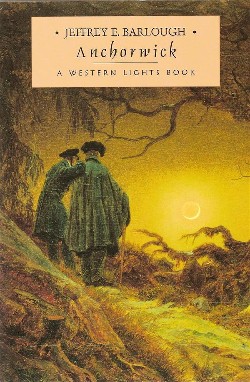 Of all the books I’ve reviewed for Black Gate, the one that sticks in my head is Jeffrey Barlough’s Strange Cargo, which I reviewed way back in 2005 for BG #8. Grumpus that I am, of course I dinged it. I still stand by the review years later, though I feel some guilt about it too. Barlough is such a wonderful yet unappreciated fantasist that to judge him on that single novel is like measuring Hemingway by To Have or Have Not or Kerouac by The Subterraneans. Frankly, Strange Cargo isn’t even a bad book; it’s simply a novel where the author’s ambition exceeded the page count and so shortcuts were taken. Literary ambition is hardly a crime and Barlough is, nevertheless, a talent I invite everyone to sample.

With his first three books OOP, Barlough’s fifth, Anchorwick, makes a fine initiation for newcomers (younger versions of the protagonists from Barlough’s debut, Dark Sleeper, appear here in supporting roles). His alternate 20th century, called the Western Lights, has a sophisticated backstory that’s easier to link to than for me to explain, but I’ll try: in a world where the Ice Age never ended, a cataclysm has reduced humanity to a slip of English civilization along North America’s western coastline. It’s neither steampunk nor weird western; the technology is early 19th century. It’s kinda-sorta gaslamp fantasy, except there doesn’t seem to be any natural gas. Barlough’s creation is best described as a Victorian Dying Earth — gothic and claustrophobic yet confronted by its inhabitants with upper lips held stiff.