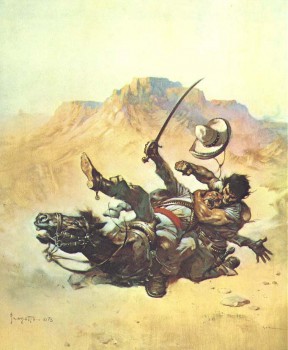 This upfront: The Return of the Mucker is less effective a novel than last week’s topic, The Mucker. The strange genre-mashings of the first book give way to the more familiar settings of the American southwest and northern Mexico. The Return of the Mucker plays as an outright Western for most of its length, and offers nothing as lunatic as samurai cannibals. As a story, it doesn’t hold together as well as The Mucker, getting weighed down with too much plot “business” while the first book stripped away extraneous aspects the farther the story advanced until it came down to only the hero and heroine, Billy Byrne and Barbara Harding.

Yet The Return of the Mucker is still a strong work that glosses over its shaky plot elements with a breakneck action finale, fitting developments of Billy Byrne’s personality that merge together his extremes, and one of Burroughs’s most intriguing characters: a hobo-poet hero named Bridge.

Burroughs’s working title for The Mucker’s sequel was Out There Somewhere, the name of a poem that inspired the character of Bridge. (More about that later.) Burroughs submitted the novel to All Story in March 1916, soon after completing it. Editor Thomas Newell Metcalf purchased the story immediately, and the first of five installments appeared two months later under its more marketable title. The Return of the Mucker was published in hardcover in 1921 from A. C. McClurg as Part II of a volume simply called The Mucker.

When the story begins, Billy Byrne is no longer “the mucker.” ERB makes that clear as a cloudless blue sky in the second paragraph: “Billy Byrne was no longer the mucker.” Barbara Harding cured Byrne of his criminal life and coarse ways: everything that defines the now outdated slang term “mucker.” But Billy Byrne surrendered his love for Barbara so she could marry William Mallory at the conclusion of the first book, and he’s now a man without direction — or a complete personality. If he isn’t the mucker, and he’s not with the woman who changed him, what is he? END_OF_DOCUMENT_TOKEN_TO_BE_REPLACED 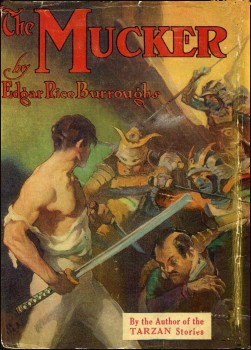 I spent last year on an extended trip to Mars exploring Edgar Rice Burroughs’s fantastical version of the Red Planet. But after reviewing all eleven books in the Barsoom series, the time had arrived to return to Earth and the early phase of ERB’s career. Spending too much time with the final sputterings of Burroughs’s Martian stories, when much of his talent was ebbing, has a strong depressive effect. Let’s relive the enthusiasm of youth. Or middle age, in the case of Edgar Rice Burroughs. Yeah, he was a late bloomer.

So, on the centennial of its writing, I land back on Earth with one of ERB’s grubbiest, most “realistic,” and finest works of adventure, The Mucker.

The Mucker and its closely entwined sequel written two years later, The Return of the Mucker, have long held high positions in the canon of ERB’s work — but only for enthusiasts. The general reading population, who might pick up a few Tarzan books or go through the first three Martian novels, has scant familiarity with this oddly titled work. Perhaps it’s the strangeness of the name “Mucker” — is this about the adventures of a sewer worker? — or simply that it doesn’t belong to one of the author’s famous franchises, but the book usually inspires shrugs of ignorance when brought up, mixed with measures of curiosity. Of all Burroughs’s novels, this is the one about which I get the most inquiries: “Hey, is that ‘Mucker’ thing worth reading? I’ve heard good things, but I just never got around to it.”

Let me answer the question for everyone who has asked or planned to ask: Yes, The Mucker (and its sequel) is good. Actually, superb. Burroughs gathered all the conventions from the stories and novels of the first fifteen years of pulp writing, most of which are unreadable today, and condensed them into a rollicking action yarn with fistfights, shipwrecks, cannibals, sword duels, a lost civilization, kidnappings (and not just of women), street brawls, piracy, and prizefighting. And he wrapped this all around one of his most interesting heroes, a man who goes from an alley thug without an ounce of sympathetic qualities (aside from questionable criminal “honor”) to a reformed hero in a tangled love tale.