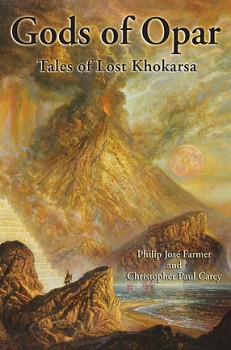 Once upon a time, in a lost civilization known as West Germany, the Kreuzberg Kaserne U.S. Army Base let fifth graders leave school grounds at lunchtime. Every week, I crossed the street to the little base bookstore. In the late winter of 1972, I bought the first DC Comics issue (#207) of “Tarzan of the Apes” because I wanted to learn how the heck a human being ended up living with apes. When the writer/artist, the late, much-lamented Joe Kubert, ended his adaptation with Edgar Rice Burroughs’s original cliffhanger, I read Burroughs’s sequel, The Return of Tarzan, to finish the origin story. Then I found myself devouring every other Burroughs book reprinted in the early 1970s.

I couldn’t have been the decade’s only new Burroughs fan, because by the mid-1970s, his estate had authorized two different Tarzan-related series by other authors: the Bunduki novels by J.T. Edson and the Ancient Opar novels by Philip José Farmer. Both series produced a novel or two and then, as far as I knew, ended. The tie-in titles went out of print, their copyright was probably owned or controlled by the Burroughs estate, and Philip José Farmer died in 2009. I figured none of these books would ever see another reprint.

I figured wrong, because Subterranean Press has just released Gods of Opar: Tales of Lost Khokarsa, which is an omnibus of the two Ancient Opar novels by Philip José Farmer – Hadon of Ancient Opar (1974) and Flight to Opar (1976) – together with a third, new novel in the series, The Song of Kwasin, by Philip José Farmer and Christopher Paul Carey (Black Gate recently ran essays from Carey about the history of his remarkable collaboration with Farmer, and his discussion of Farmer’s ambitious creation, the lost civilization of Khokarsa.)