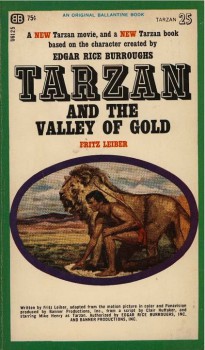 By Fritz Leiber, from a Screenplay by Clair Huffaker

I have never watched a movie and then immediately felt an urge to “Read the Jove Paperback” (or whatever publisher released the tie-in). Movie novelizations are marketing after-thoughts and I think most readers pick them up as after-thoughts as well. A wanderer in a bookstore might spot a paperback copy of Blockbuster Film You Kinda Enjoyed and think to herself, “Hey, this might be a fun airplane read.”

But there aren’t as many bookstores to wander in these blighted times and with the gap narrowing between the time of a film’s release and its DVD/Blu-ray popping up in the impulse item rack of the supermarket, the niche genre of the novelization has entered a slow death cycle. Fewer big tent pole movies are getting the prose treatment.

I’ve read more than my sane share of novelizations, the majority from Alan Dean Foster because Alan Dean Foster rocks (he even responded to my review of his Clash of the Titans novelization). But with Tarzan and the Valley of Gold, I found myself for the first time in the peculiar reverse position of wanting to see a movie because of the novelization.

The idea of one of the Grand Masters of speculative fiction, an icon of sword-and-sorcery, penning any genre film novelization is delicious. And penning a Tarzan novelization … that’s the colored sprinkles on top of the chocolate doughnut. Novelization or not, it’s a Fritz Leiber Tarzan book.