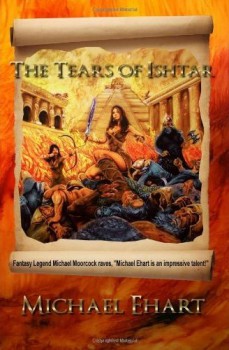 Fans of Michael Ehart’s 2007 release The Servant of the Manthycore (Double-Edged Publishing) will find a lot of familiar ground in The Tears of Ishtar – in fact the later book contains all of the stories collected in the former, some of which have been enlarged or altered, alongside new material. While I will admit to feeling a slight twinge of disappointment upon discovering that I had already read most of the stories in this book (and, when one factors in those stories appearing in other anthologies such as Rogue Blades Entertainment’s Rage of the Behemoth, I think I may have read nearly all of these tales at one time or another), that feeling quickly dissipated. These are, after all, good stories in the tradition of classic sword & sorcery, and this new collection-cum-fix-up-novel showcases Ehart’s Ninshi stories in a more complete and ultimately satisfying way than the previous book.

The Tears of Ishtar spans something like 3,000 years in the life of the cursed, nearly immortal warrior woman Ninshi, the Servant of the Manthycore. Beholden to this legendary, man-eating beast, Ninshi spends long centuries luring men into murderous ambush to satisfy the Manthycore’s appetite – and in exchange is rewarded with brief glimpses of her imprisoned lover, a man ensnared by the Manthycore’s magic and used as leverage against her. But these grim transactions do not comprise the main action of The Tears of Ishtar, as Ninshi finds herself confronting all manner of gods and spirits as she wanders the lands of the ancient Near East. Set against the backdrop of the rise and fall of empires, Ehart’s stories, which move relentlessly forward and often skip centuries of intervening time, capture the sweep and almost unimaginable chronological depth of a time and culture too-often merely abstracted as ‘Ancient Mesopotamia.’ It is that familiarity with the nuances of history, the inclusion of solid details of material culture and belief, and frequent biblical and historical allusions, which elevate the setting of The Tears of Ishtar in a memorable and compelling way.