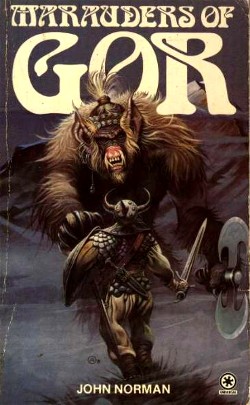 io9 has an interview with the author of the Gor novels, John Norman — a.k.a. John Lange, PhD and professor of philosophy at Queens College CUNY. Who knew?

Lange responds at length on Nietzsche:

In Nietzsche, the expression is ‘Übermensch’, which might be translated variously. A common translation today would be ‘Overman’. It might also be understood as a higher person, a superior person, an ideal as to what a human being might be, a comprehensible ideal toward which a human being might aspire, and such.

I confess I’ve never read any of the Gor books, although I’m certainly aware of their notorious sexy-time reputation. And, even putting that aside, the interviewer’s statement that “people frequently describe Gor as a Nietzschean society” doesn’t entice me to read them anytime soon since Nietzsche is so clearly misunderstood in popular culture. Yet while I disagree slightly with Lange’s interpretation of the Ubermensch (the reason why “The word is always used in the singular, never as though there could be more than one,” is not because there can only be one Highlander, but because Nietzsche realized the transformation was an individual experience, not a collective one, similar to the Buddhist idea of enlightenment), I think he provides a fine explanation of Friedrich’s world-view, which had nothing to do with master races and rippling pecs but rather with internal epiphanies and ideals.

Sword-and-sorcery has always been a perfect vehicle for existentialist themes. Here’s hoping, to paraphrase the interviewer, that Nietzsche becomes more popular not only among young philosophers and post-modern theorists but among fantasy writers as well. Just with fewer whips and chains.