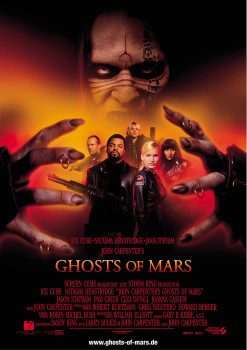 I thought writing two John Carpenter articles in a row was sufficient. I had a strong enough excuse to go two-for-two with Carpenter because of the Blu-ray debuts of Prince of Darkness and In the Mouth of Madness, films that have developed a growing and appreciative fan base. The idea of doing a third article on a John Carpenter film, let alone one on the critically rejected Ghosts of Mars… no that never crossed my mind when I penciled in on my calendar, “Blu-rays for PoD and ItMoM! Write for Black Gate!”

However, enthusiastic comments on both Black Gate and Facebook made it imperative I complete a John Carpenter on Blu-ray trilogy of articles.

(Oh, wait: Assault on Precinct 13 arrives on Blu-ray today. Should I go for four in a row? Or instead do that examination of the Russian animated film The Snow Queen in time for the release of Frozen? I wish more of life’s dilemmas were of this type.)

Watching Ghosts of Mars on Blu-ray was my first time seeing the movie since August 2001, when it managed to hold onto multiplex screens for a week. The horrific opening weekend — coming in ninth place — meant Ghosts of Mars rapidly evaporated into the thin atmosphere, leaving a carbon blast mark people interpreted as the end of John Carpenter’s career. The $28 million science-fiction action/horror film managed a dismal $14 million global gross. Yes, global. Even in a career like Carpenter’s, filled with disappointing box-office returns, Ghost of Mars crashed epically. The critical and audience reaction was also murderous; it seemed unlikely the film would join some of Carpenter’s other financial disappointments like The Thing and Big Trouble in Little China in future fan appreciation.

Yet Carpenter has always had a reputation for being ahead of his time. Was it now time for Ghosts of Mars? Did the passage of twelve years give the film a better sheen, offer more to digest?