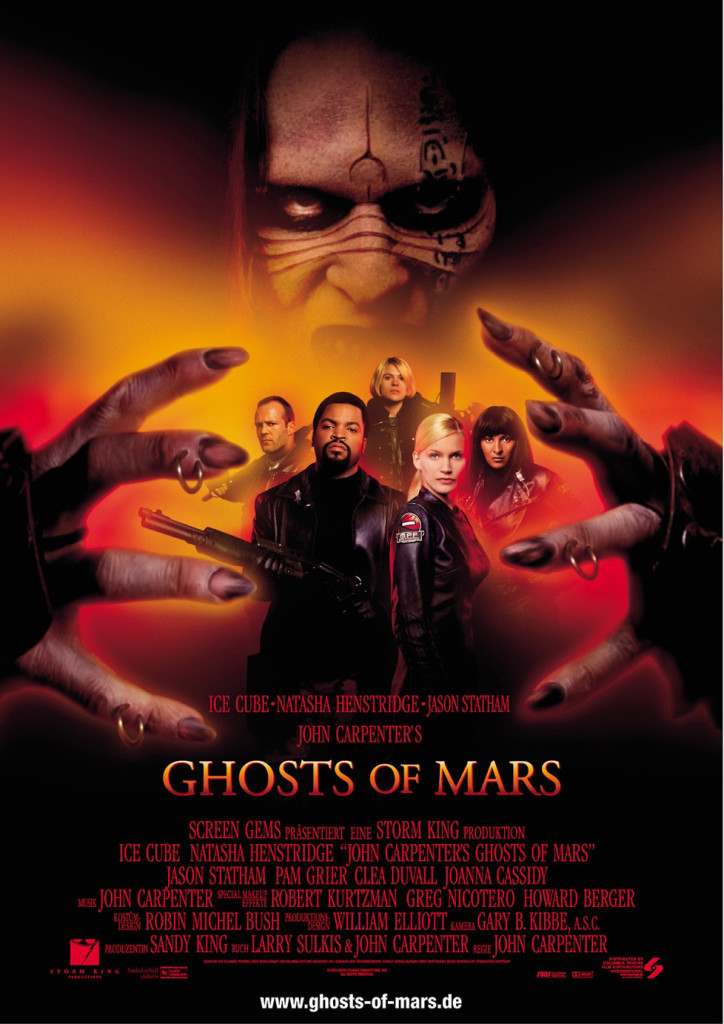 Last month, John Carpenter made his return to the big screen after an eight-year absence. Not as director, but as executive producer and (more importantly) composer for the new Halloween. It was great having him back, the film’s pretty darn good considering this franchise’s track record, and the score is fantastic.

Now I have to come in and get all negative because look what film is next on my (almost finished) John Carpenter career retrospective.

Carpenter has experienced many financial disappointments with his movies, but none was more catastrophic than the reception for Ghosts of Mars in 2001. Costing $28 million to make at Sony’s Screen Gems division (the folks responsible for the Resident Evil and Underworld movies), John Carpenter’s semi-remake of Assault on Precinct 13 set on Mars only grossed $14 during its theatrical run. That’s not the domestic gross — that’s the worldwide gross. In the aftermath of this flop, Carpenter took a near decade-long hiatus from moviemaking and has only directed one film since. (“I was burned out. Absolutely wiped out. I had to stop,” he said in a 2011 interview.)

I’ve examined Ghosts of Mars before. At that time, it was my first viewing since the movie was in theaters. Now that I’ve gotten to grips with analyzing those initial reactions, how does the film hold up? Is it Carpenter’s worst movie, as many people have pegged it?

The year: 2176. The place: Mars, now colonized by 640,000 humans under a matriarchal organization, the Matronage. Lt. Melanie Ballard (Natasha Henstridge), an officer in the Martian Police Force, is part of a team sent by train to pick up notorious outlaw James “Desolation” Williams (Ice Cube) from lock-up at the Shining Canyon mining camp. When the MFP arrives at Shining Canyon, they initially find the camp deserted except for a few prisoners locked in cells and numerous mutilated bodies. Soon, they find out what happened: Mars’s long-dormant native population has microscopically turned all the miners at the station into ravening brutes looking to wipe out the human invaders. The MFP teams up with Desolation Williams and the prisoners to survive the onslaught of the Martian host bodies and make it back to the train when it returns.