Fritz Leiber won six Hugo Awards for his novels The Big Time and The Wanderer as well as the novelette “Gonna Roll the Bones,” the novellas “Ship of Shadows” and “Ill Met in Lankhmar,” and the short story “Catch That Zeppelin.” “Gonna Roll the Bones,” “Ill Met in Lankhmar,” and “Catch That Zeppelin” also received the Nebula Award. He won the World Fantasy Award for the short story “Belsen Express” and the novel Our Lady of Darkness. He won his first British Fantasy Award for The Second Book of Fritz Leiber and his second for “The Button Molder.” He won the Geffen Award in 1999 for the Hebrew translation of Swords and Deviltry. The 1962 Worldcon presented him with a Special Convention Award in 1962 for his collaboration with the Hoffman Electronic Corporation for their use of science fiction in advertising.

Leiber is one of the few people who was a guest of honor at multiple Worldcons, having the honor in 1951 at NOLACon I, the 9th Worldcon, held in New Orleans in 1951 and again in 1979 when he was a guest of honor at Seacon ’79 in Brighton, UK. He was the Guest of Honor at the 4th World Fantasy Con in Fort Worth, Texas in 1978. Leiber has most famously collaborated with Harry Fischer on the concept for Fafhrd and the Gray Mouser for the story “Lords of Quarmall.” He has also collaborated with Judith Merril and Fredric Brown.

Leiber first published “The Cloud of Hate” in the May 1963 issue of Fantastic Stories of Imagination, edited by Cele Goldsmith. He included it as the lead-off story in the Lankhmar collection Swords in the Mist and in 1975 it showed up in Sword & Sorcery Annual. When Donald M. Grant published a collection of three Lankhmar stories in Bazaar of the Bizarre, “The Cloud of Hate” was one of the those chosen. It showed up in the Lankhmar omnibus volumes The Three of Swords and Lean Times in Lankhmar as well as Thieves’ House: Tales of Fafhrd and the Gray Mouser, Volume 2 and The First Book of Lankhmar. The story has been translated into Dutch, German, and twice into French, usually for collections of Leiber’s Lankhmar stories.

“The Cloud of Hate” is one of Leiber’s many stories about Fafhrd and the Gray Mouser. The two are serving as watchmen on the evening of a gala celebration of the betrothal of the Lankhmar Overlord’s daughter to the Prince of Ilthmar. They are stationed far from the festivities on a cold, foggy street. The action, however, starts below the streets of Lankhmar, with a mob of five thousand summoning the physical manifestation of hate to flood the streets and, one assumes, attack the Overlord’s party.

END_OF_DOCUMENT_TOKEN_TO_BE_REPLACED 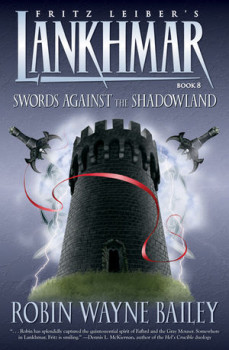 Recently I completed my reading of all of Fritz Leiber’s Fafhrd and the Gray Mouser stories. After I had put down the second or fourth collection (this depends on how you approach the editions from White Wolf, which collected the books doubly in single volumes, and these are the publications with which I began my survey), I made some faintly denigrating comment on Goodreads (if I remember it correctly), something about the quality of these stories being like flies caught in amber. This was a metaphor for Leiber’s soupy, languid, highly embellished prose style.

But a year or so later, as I got to the end of The Knight and Knave of Swords and then the termination of Swords and Ice Magic, I found that I had really begun enjoying these stories. I had even begun to admire the writing style. So I bought, without question, Robin Wayne Bailey’s Swords against the Shadowland out of interest to see who possibly could be so foolish as to try to meet Leiber on his own brilliant terms.

Before I get to a review of Leiber and then, specifically, to Bailey, I want to detail the kind of place I come from. As I become a regular contributor to Black Gate, I realize that there are quite a number of books that I really should have read while I was growing up. Now, I’ve read a lot of fantasy. That will be apparent. But sometimes I pick up a new volume, open the cover, begin reading, and ask myself, “Why didn’t I read this twenty-five years ago?” One of the answers might be because of my intense snobbishness, a youthful shortcoming that I slightly touched on last entry. Another reason is because, at the beginning of eleventh grade, I artificially arrested the sheer volume of my high fantasy reading by consciously “growing up” and turning my back on the genre in preference for established “literary” pursuits. But also, as I cast my memory back through the years, I’m coming to believe that I didn’t read a lot of these works then because a lot of these weren’t all that visible.