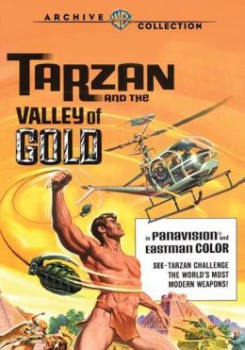 Tarzan and the Valley of Gold wastes no time telling viewers of the mid-1960s that this was not going to be their grandfather’s Tarzan. Or their father’s either. With swinging ‘60s big band jazz backed with bongos playing over a Warholian montage of pop art colors projecting scenes from the movie, it’s impossible not to think JAMES BOND! JAMES BOND! from the moment the opening titles start.

No doubt that was producer Sy Weintraub’s intention with this 1966 outing for Tarzan, the first of a trio starring Mike Henry. The credits sequence is a dead-on imitation of the style of Maurice Binder for Dr. No. After the director’s credit fades, the film hops into a Goldfinger-inspired sweep over a tropical resort city, concluding on a helicopter taking off from a luxury yacht in the harbor. Then, in another scene swiped from Dr. No, assassins shoot a limo driver outside the airport, and an imposter chauffeur awaits the arrival of our handsome hero in his impeccable suit and tie. Cue city montage with more swingin’ Latin big band rhythms! Smash into an action scene where a sunglass-wearing sniper tries to pick off our sharply dressed hero in an empty bullring. The crafty Ape Man turns the tables on the gunman and kills him by dropping a giant Coke Bottle advertising prop onto him. Ah, good times.

Sy Weintraub shows with this opening that he has taken the “New Look” Tarzan he introduced in 1959 in Tarzan’s Greatest Adventure one step further to imitate the stratospheric popularity of spy cinema of the decade. Tarzan not only speaks in complete sentences, but he is comfortable donning civilization’s trappings to travel the world to bring savage ape justice to turtleneck-wearing supervillains who adore exploding watches.

The temptation to go this direction must have been hard to resist: by the start of 1966, Bond-mania was approaching its delirious apex; Thunderball came out in December 1965 and was on its way to becoming one of the highest-grossing movies in history. Bandwagon films are often poor quality imitations, but Sy Weintraub already had a famous character available who could cut a dashing a dangerous figure to put at the center of his attempt to grab some Bond cash. It turned out well, better than you might initially think a “Tarzan goes ’60s spy” film would. Tarzan and the Valley of Gold, currently available as a manufacture-on-demand DVD from Warner Archive, lacks the excellent script, performances, and drama of Tarzan’s Greatest Adventure, but it delivers in the breezy fun department.