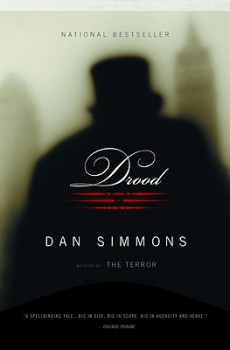 In National Lampoon’s Vacation, a family goes on a cross-country road trip, enduring hardship and danger, seeing cheesy landmarks and ultimately arriving at an amusement park that was closed for construction. In other words, a long and harrowing journey with no pay off, but still a lot of fun to watch.

Sort of how I feel about Dan Simmons’ latest suspense thriller, Drood. Weighing in at a hefty 784 pages in hardback (976 in mass market paperback!), I was somewhat reluctant to devote the time to this behemoth of a novel. However, enticed by the premise and my somewhat love / hate relationship with Simmons, I picked up a copy and got help from a stock guy with carrying it to the car. And I must say, the premise is genius.

The last, and unfinished work of Charles Dickens, The Mystery of Edwin Drood, was published in 1870 and became famous in its time, largely for being a mystery with no ending. The serialized work was intended to unfold over twelve installments, however Dickens died after completing only six. Now before you go having high-school-literature-class flash backs, hear me out. You don’t have to be at all familiar with The Mystery of Edwin Drood in order to read Simmons’ book; I sure wasn’t, though I did look into it out of curiosity.