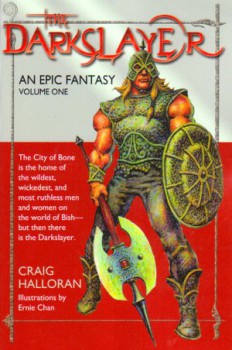 In the city of Bone, on the world of Bish, the warrior Venir and his friend Melegal the thief incur the mortal wrath of a royal family. The adventurers quickly get out of town, but not out of danger: the wicked nobles join forces with the most evil race on Bish, the underlings, to track the duo down and kill them.

Actually, mostly the bad guys are interested in Venir. Which would be cause for concern on his part if the big blond fighter weren’t secretly the underlings’ legendary foe, the Darkslayer.

Craig Halloran gets the macro structure of this self-published novel right. He ably juggles a cast of about two dozen characters, both good and evil, switching between their story lines with the appropriate rhythm. He shows us a good chunk of Bish, too, and delves into its history as well as his protagonist’s. Not only do we see Bone, its more multicultural neighbor Two-Ten City, two forests, and a battle-scarred wasteland, we also follow the escapades of the immortal who created the world out of boredom. And it all comes together comprehensibly and sensibly, and sets up its heroes for future outings. All of that takes work.