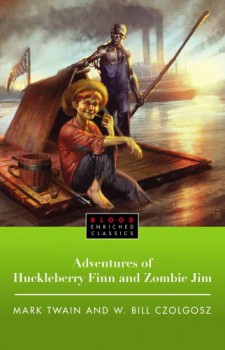 The Adventures of Huckleberry Finn and Zombie Jim: Mark Twain’s Classic with Crazy Zombie Goodness, and The Adventures of Tom Sawyer and The Undead are, of course, part of the recent trend of Classic Novel plus fill-in-the-blank-monster that has brought us such gems as Little Vampire Women, Queen Victoria: Demon Hunter, Sense and Sensibility and Sea Monsters, Android Karenina, Robin Hood and Friar Tuck: Zombie Killers, The Undead World of Oz, Mansfield Park and Mummies, Jane Slayre, Alice in Zombieland, and Emma and the Werewolves. So far. END_OF_DOCUMENT_TOKEN_TO_BE_REPLACED