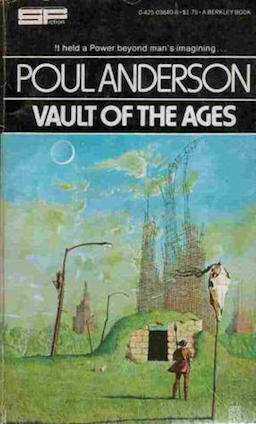 Even though this survey seeks to showcase, specifically, Anderson’s fantasy works, I want to begin with what may be argued to be his first novel: Vault of the Ages.  It moreover wouldn’t be all that hard to argue that this work is fantasy, anyway. Perhaps it’s historical fantasy – a kind that anachronistically depicts a medieval northern tribal culture in the future. It’s undeniably post-apocalyptic, and many of these works are not only fantasy but escapist fantasy at that. Who hasn’t been locked into a frustrating, mind-numbing job – a stereotypical office job, for instance – and thought, “If only I had some real problems with which to deal with right now, like zombies, or road warriors, or radioactive mutants”? Who hasn’t secretly yearned for the chance to see what they truly are capable of, to pit their meager store of talents against all that the dangerous world might offer, and who hasn’t secretly concluded that they would do just fine – they would just have to get a gun, of course, and stockpile some food – and take out that weirdo next door, first thing!

Not only would I classify Anderson’s first novel as belonging to the species of post-apocalyptic literature, but I’d also call it mundane science fiction, because none of the science in here is extrapolative. In fact, it can be argued that there is no “science” here at all, because the gist of the science is the salvage of iron, to be hammered into common swords and shields, out of radioactive cities. And gunpowder which is hidden in the – you guessed it – Vault of the Ages.

I also might classify this as a boy’s novel, because it begins with an overly informational account of actual time capsules in Atlanta, Georgia and in New York City. It’s hard to see what purpose this introduction might serve other than didacticism, and this consequently suggests an audience that often is perceived to be in need of didacticism. Moreover, the main characters are routinely called “boys,” which, intentionally or not, because of the way in which these characters gleefully and energetically hurl themselves into very scary, very potentially fatal situations, lends this work the character of an adventure novel aimed at Boy Scouts. In other words, for me, this book is short in emotional realism. We shall have to talk about Viking age perspectives in time, but even taking this into account, the boys’ worldviews and actions seem wantonly cavalier.