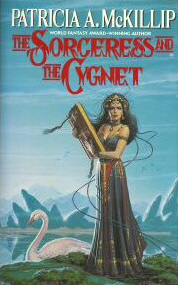 Corleu is an oddity, a white-haired youth in a black-haired tribe of wanderers.  His family has a talent for foresight, but all he has is a knack for stories.  And then one year the tribe goes south for the winter and finds itself in a marsh where time seems to stand still, where the flowers are perfect but the skies are invisible behind the mists — and no one knows how long they’ve been there. No one but Corleu notices anything wrong.

Then things get really surreal.

If you like your magic as a form of exotic science, with clearly delineated cause and effect — the sort of worldbuilding Brandon Sanderson does, for instance — The Sorceress and the Cygnet is probably not the book for you.  Little is explained, least of all the magic system.

The plot revolves around five beings whose nature is never entirely defined.  They could be gods, although they’re never worshipped.  They could be stories come to life.  They have titles rather than names.  They’re represented in the heraldry and the constellations.

They seem extremely powerful, but four of them have apparently been trapped by the fifth, the being called the Cygnet.  One of those four — the Gold King, who reads like a sun god or a death god or both — tricks Corleu into a quest to find the Cygnet’s heart.