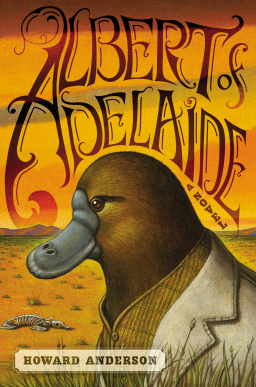 I’m a sucker for anthropomorphic fantasy. You know, stories that feature animals with human speech and personalities. Some of the best fantasy ever created has been in this fine tradition.

Watership Down. Carl Barks’ Uncle Scrooge. The Secret of Nimh. The Wind in the Willows. The Redwall books. The Lion King. Ratatouille. 101 Dalmatians. Joyce Maxner and William Joyce’s Nicholas Cricket.

Is there anything new in anthropomorphic fantasy? Anything that doesn’t come from Disney and Pixar, anyway? Yes there is. Exhibit A: the debut novel from Howard L. Anderson, about which Mary Doria Russell says: “If Larry McMurtry had written Wind in the Willows, he might have come up with something almost as wonderful and moving… This is a novel that defies analysis and summaries.”

Having escaped from Australia’s Adelaide Zoo, an orphaned platypus named Albert embarks on a journey through the outback in search of “Old Australia,” a rumored land of liberty, promise, and peace. What he will find there, however, away from the safe confinement of his enclosure for the first time since his earliest memories, proves to be a good deal more than he anticipated.

Alone in the outback, with an empty soft drink bottle as his sole possession, Albert stumbles upon pyromaniacal wombat Jack, and together they spend a night drinking and gambling in Ponsby Station, a rough-and-tumble mining town. Accused of burning down the local mercantile, the duo flees into menacing dingo territory and quickly go their separate ways — Albert to pursue his destiny in the wastelands, Jack to reconcile his past.

Encountering a motley assortment of characters along the way — a pair of invariably drunk bandicoots, a militia of kangaroos, hordes of the mercurial dingoes, and a former prize-fighting Tasmanian devil — our unlikely hero will discover a strength and skill for survival he never suspected he possessed.

Any reading experience featuring a Tasmanian devil, drunk bandicoots, and a “pyromaniacal wombat” gets my immediate attention. Albert of Adelaide was published in July by Twelve/Hachette Book Group. It is 223 pages for $24.99 in hardcover, or $12.99 for the digital edition.

See all of our featured New Treasures here.

Got it. This should be great.

Let me know what you think!