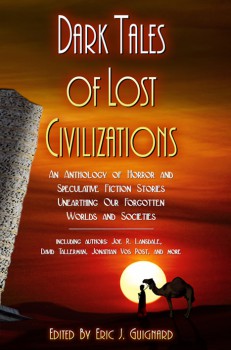 Many readers might think they knew what to expect from this book, just from the title. They would be wrong. Mr. Guignard does an astonishing job of expanding the apparent range of his title into a varied and colorful collection of almost everything under the sun, or rather, everything hidden away from the sun.

Who knew there were so many kinds of lost civilizations? The civilizations visited in these stories range from historically documented civilizations—either trampled under the march of history, as in Jamie Lackey’s story, “Quetzalcoatl’s Conquistador,” or active participants in the trampling, as in “The Funeral Procession” by Jay R. Thurston—to the entirely mythical, like that of “Gilgamesh and the Mountain” by Bruce L. Priddy. In between these two extremes, we find an intriguing half historical, half legendary lost society in Jackson Kuhl’s “Quivira”.

There are lost civilizations drawn from uncharted islands (“The Island Trovar” by JC Hemphill), from nameless ruins reeking of antiquity and better left unexplored (“The Door Beyond the Water” by David Tallerman or “Königreich der Sorge or Kingdom of Sorrow” by C. Deskin Rink) or even from fictional sources like Oz (“Directions” by Michael G. Cornelius).

Nor is it just the lost civilizations themselves that are varied. Rather, it is the changing mood and tone that keeps this anthology so fresh. The reader assumes there will be horror (since it is mentioned in the subtitle) and will not be disappointed by Chelsea Armstrong’s “The Nightmare Orchestra”. The reader also suspects there will be something spooky, and Joe R. Lansdale provides a deliciously creepy yarn in “The Tall Grass”.

But most readers will not expect a laugh-out-loud futuristic comedy like Gitte Christenson’s “Whale of a Time”. While it is not surprising that most of these tales deal with magic, or at least with a lost technology so advanced it might as well be magic, in “Sumeria to the Stars” by Jonathan Vos Post. we find a hard science SF tale. There is no horror, or even real magic, in “To Run a Stick Through a Fish” by Mark Lee Pearson, only bittersweet grace. And nobody could possibly expect the sheer quirky originality of “Bare Bones” by Curtis James McConnell.

Almost any story in this anthology, whether the fourteen cited above or the eleven left for the reader to discover, is worth the price of purchase. The entire collection is a delight. Kudos to Mr. Guignard for assembling it.

Thanks for the shout-out, Michaele. The fix is in!