Characters do the same thing, might be through different locations in space or states of being, but they travel to and from and through.  Both have twists and turns and go places you don’t always expect when you’re traveling on or with them.  Both can vary a lot in how they are made, their condition, the danger that surrounds and follows them.  Varmin Way and its companions from Mieville’s “Reports Of Certain Events In London” go so far as to have emotional lives, loves and hates as well as being able to appear, disappear and move around in limited ways.  The Lemon Road in Amal El-Mohtar’s The Honey Month will have you for its bride.

But the roads I want are hard to find.  It’s not even that easy to find roads with a distinctive feel and appearance, yellow bricks notwithstanding.  Some roads have guardians or spirits rather than being their own characters.  In King’s The Dark Tower series, the Path of the Beam that Roland and his Ka-Tet encounter begins with an encounter with the massive cybernetic bear and Richard Adams shout-out Shardik.

Kij Johnson has a road kami that figures strongly in Fudoki.  Bikers give one another guardian bells to protect them from evil spirits of the roads that want nothing more than to see them crash.

Roads do take you dangerous places.  There are times when the road, like the Black Road from the Courts of Chaos in the Chronicles of Amber is the danger, or, at least, dumps the danger at the castle you were planning on besieging.  And roads always seem to work better for evil than they do for good, too.  When the girl takes the road of needles, the wolf takes the road of pins and gets to grandmother’s house first.  But stay on the road; wandering off lands you in the woods and whether it is alcoholic wood elves and spiders or the three beasts of error that find you, you’re not going to like what happens.

The most dangerous place a road can take you is to a crossroads.  It’s there that Hekate and Papa Legba hang out with suicides and vampires, and if you brought a guitar on this journey that you’ve been meaning to learn how to play, wait until midnight.  The song you’re looking for is “Old Dan Tucker.”  I’ve heard.

Evil spirits, it seems, have pretty bad senses of direction, so planting them out at the crossroads is a practical thing to do.  Likewise, crossroads are a place that isn’t any place.  They are neither here nor there, but they are there, which makes for thin walls and easy magic.  Another good place for witches – you’ll find that there aren’t many places that aren’t good for witches which also aren’t currently on fire, but crossroads are especially good, possibly even the best. 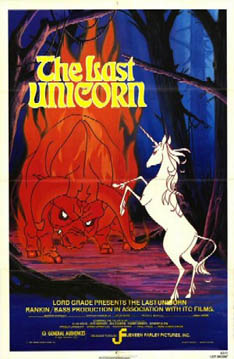 Roads usually exist in white space in fantasy.  My strongest impression of road comes from Beagle’s The Last Unicorn and there’s not a lot of road in the text, but, those of you who have seen the animated feature, you have the song in your head right now, and don’t tell me you don’t.

In the end, they tend to mean more and more often than they do and do more often than they are, and that’s pretty good.  We know roads, and we know what they mean.  They are the thread of story, strung with dangers and hardships and allies and all those journey, comma, hero’s beads that make a pretty fantasy story.  There’s nothing wrong with that, either, but if you know of roads that are, roads that snap and bite, roads that lust and hate and want to make someone their bride, I’d love to hear about them.

Until then, this old evil spirit has a bus to catch.

The most dangerous place a road can take you is to a crossroads. It’s there that Hekate and Papa Legba hang out with suicides and vampires, and if you brought a guitar on this journey that you’ve been meaning to learn how to play, wait until midnight.

I hear this in Tom Wait’s voice.

Roads **are** complex creatures. Thanks for summoning up all their liminal menace and promise.

Roads always make me think of “The White Road” with its blood red streak all down the middle. And was it a pig? Or a fox? Or a maid? One just never knows. But I think that road must want the blood, being so pale and vampiric in nature. Don’t you?

Roads are built for ease of travel and for commerce. They often get used, in fantastic fictions, by the military. The last time I took a road trip (on a road, no less), I listened to an audio recording of George R.R. Martin’s “The Ice Dragon.” Guess how the bad guy army arrived? Yep. By road.

[…] end.  This is where you’re going to find the Dark Lord and/or existential dread, and the third installment of this column seems a little too soon.  And, oh, but do a number of sexual metaphors creep into […]