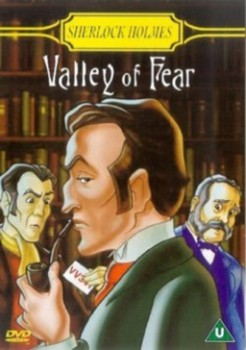 As famous a (costumed) character as Sherlock Holmes is, it is no surprise that he has lent himself to animation. Of course, you’ve seen images of Daffy Duck, Snoopy and Mickey Mouse, among many others, imitating Holmes: usually with an oversized magnifying glass.

Actual Holmes characters can be found in such animated efforts as Sherlock Holmes in the 22nd Century (Watson is a robot) and Tom and Jerry Meet Sherlock Holmes. Of course, Disney’s The Great Mouse Detective features Basil of Baker Street, an excellent, if tiny, Holmes.

In 1983, Burbank Films produced forty-five minute animated versions of Doyle’s four Holmes novellas: A Study in Scarlet, The Sign of Four, The Hound of the Baskervilles and The Valley of Fear. To voice the great detective for the television movies, they tapped eight-time Academy Award nominee Peter O’Toole (he did receive an Honorary Award in 2003).

O’Toole, who passed away in 2013, had a long, successful career in films, was best known for his sweeping performance in Lawrence of Arabia.

He was a solid, if not inspired, choice for these four productions. O’Toole’s manner and delivery, while rather flat, fits the animated Holmes well. An antic, Jeremy Brett portrayal wouldn’t have worked as well. I can see how some folks don’t like O’Toole’s almost constant monotone. But for me, it works here.

It’s Elementary – Billy Wilder envisioned a Holmes/Watson pairing of O’Toole and Peter Sellers for his The Private Life of Sherlock Holmes, but could not pull it off.

Earle Cross, who is apparently well known for playing Tabby the Cat in something called The Muddle Headed Wombat (an Australian radio, then book series), voiced Watson in all four movies. All parties involved were clearly influenced by Nigel Bruce’s portrayal. In each movie, Watson looks sleepy, astounded and silly, though not nearly to the same extent as Bruce did. For the most part, Watson is irrelevant. You could drop him from The Sign of Four without any discernable change.

The animation style is rather straightforward, which I like. Holmes looks good and it’s easy to see what is happening onscreen. They are definitely child-friendly and some of the more adult parts were dropped out.

As I mentioned in last week’s post, Holmes is absent for significant chunks of each novella. In a post on Tom Baker’s Hound of the Baskervilles, I touched on the casting problem that creates. By keeping these cartoons at 45 minutes, it all but requires that the flashback scenes be very streamlined or eliminated altogether. Little damage is done in doing so. 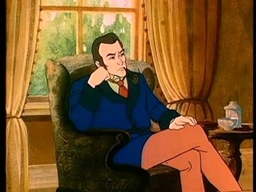 It’s Elementary – O’Toole played Arthur Conan Doyle in Fairy Tale: A True Story. That was based on the Cottingley Fairies incident, in which Doyle was hoodwinked by two schoolgirls into believing they could take pictures of fairies.

I like these four cartoon movies. They’re suitable for young children, which is something I can appreciate (I think “hellcat” was the worst word in any of them). While the scripts aren’t enthralling, there’s not much fluff, which isn’t uncommon when the novellas are stretched into 90 minute or two hour efforts. And they’re certainly Canonical.

I bought all four reasonably cheap from Amazon, so they’re easily available. I think they’re pretty decent watches for the Holmes fan: especially parents of a younger one. They could generate some interest in the stories themselves.

I need to schedule another viewing of Sheerluck Holmes and the Golden Ruler for a post.

Bob, I don’t know if you’ve written on these already, but a friend gave me the “Classic TV Sherlock Holmes Collection” not long ago. It stars Ronald Howard as Holmes (if he’s not Leslie’s brother I’d be very much surprised) and H. Marion Crawford as Watson. As I know that you and I are on the same page vis a vis Jeremy Brett, I’d be interested in hearing your take on this one.

Violette – I am a HUGE fan of Ronald Howard: he’s one of my five favorite Holmes’. He played a younger Holmes with a sense of humor. There absolutely will be a post about that series.

Sheldon Reynolds, who was behind the whole thing, did a second tv series with Geoffrey Whitehead as Holmes. It was never aired in America, though several episodes are on youtube.

And of course, Reynolds’ ex-wife is Andrea Plunkett, who claims she owns the rights to Holmes and has sued several times on the issue.

I’ve got a lot to fit into the post!